Here we are, back with the continuation of Azeroth’s Beauty Contest. Last time, we revealed our #10 to #6 picks for the Hottest WoW Characters, and now were back for the top 5. As with last time, we’re aiming to keep this conversation as classy as we can, given the subject. Now onward to the winners: 5. Jaina Proudmoore –Stong, independent, beautiful, not to mention being one of the most powerful sorceresses in all of Azeroth, it’s no surprise that Jaina claims a spot on the list.

Perhaps what makes her even more appealing is her strong belief in peace and welcoming nature to all who share that vision. She dreams of uniting the forces of both the Horde and the Alliance, and has at certain times in the past succeeded in that mission when working toward a common goal or in aiming to kill a shared enemy. Too bad she has poor taste in men.

At least WoW developers have seen it fit to continue to update her character model to best show off her womanly assets. 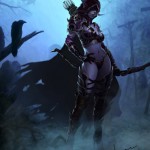 4. Sylvanas Windrunner — In both life and undeath, Sylvanas remains one of the most dangerously lovely characters in the World of Warcraft universe. A military genius, she was Ranger-General of Silvermoon before getting murdered at the hand of Arthas and then being brought back as one of his minions.

But she fought back and regained her free will, even leading the Forsaken in their fight against the Scourge. I find it an interesting twist of fate that both her and the #5 hottie have had their futures shaped largely by the next one up on the list… 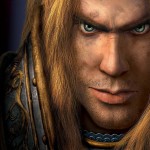 3. Prince Arthas Menethil — Perhaps the main villain of the last expansion needs no real introduction, but as far as the hot side of him, well, for me anyways, that went away when he placed that wretched crown upon his head. Conflicted though he was, I like to think that Prince Arthas truly was trying to do right by his people before he was lead astray. Very, very far astray.

Prior to his taking up of Frostmourne in Icecrown, Arthas was a brilliant swordsman trained in combat by the famed dwarf Muradin Bronzebeard and inducted into the Knights of the Silver Hand under Uther the Lightbringer. The faults that likely led to his downfall also were some of the ones that made him quite the attractive character — headstrong, reactive, strong and protective. His fate could have led down a very different path but, alas, it was not to be. 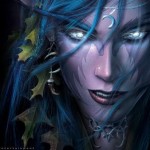 2. Tyrande Whisperwind — This staple of Warcraft lore has been making waves in Azeroth since the War of the Ancients ten thousand years ago. As a young sister of the goddess Elune, she saw beauty and compassion in the imprisoned Orc Broxigar , where others could only see a beastly creature different from themselves. It was shortly thereafter that she became the high priestess of the sisterhood and led efforts to heal those who had fallen in combat.

Her remarkable beauty and passion for her people incited the love of both Illidan and Malfurion Stormrage, but only Malfurion remains in her heart as her lifelong partner. She has served as general of the night elf sentinals, and remains one of the most hauntingly beautiful characters in the lore. Plus, she rides a nightsaber. Hot. 1. Alexstrasza — It seemed pretty obvious, to me, who would be the unequivocal winner of any beauty-related contest in Azeroth. Alexstrasza is not only the Life-Binder, Dragon Aspect of the red dragonflight, guardian of all life in Azeroth and queen of the dragons. She also is hott (with 2 T’s). Even her enormous dragon form in-game is somehow more regal than the hordes of dragons we are too-often battling against. I think it’s the horns.

But despite her massive strength and power, Alexstrasza also has a surprisingly compassionate side and is greatly in touch with the natural world. She tends to prefer peaceful solitude beside her consort Korialstrasz (runner up for the #11 spot), and away from the hustle and bustle of the world.

In her human form, which happens to have what I would consider the sexiest character model in-game (which also was bestowed upon Ysera as of the Cataclysm), Alexstrasza resides atop Wyrmrest Temple and is determined to have revenge against her most hated enemy, Deathwing. I can’t wait to see any possible encounters between the two behemoths later in this expansion — it will be epic. So, there you have it, folks. It’s a bit different from what we usually do around here, but I hope you enjoyed this look at some of my favorite characters from the Warcraft lore, and just what it is that makes them so sexy.

As a side note, while in the last list I took to generalizing the fugly-ness of many entire races of creatures in WoW, I have way too many hot characters in WoW to choose from to generalize too much. As the physical incarnation of sex, the succubus HAD to make it, but otherwise I also would rate the fragile and fancy-free dryads right up at the top, as well. And one last thing.

Honorable Mention: YOUR Character — Yes, it’s a bit cliche, but it is true that we each forge a strong connection to our characters when we spend hours upon hours leveling with them, earning them the best gear, teaching them their professions, etc. Thankfully, Blizzard was nice enough to make each of the character models appealing in their own way. With  the right gear, you can stand alongside Alexstrasza on the list. Just don’t stand against her — she will take you out.