With the ashes settling down, and the mundane routine of life returning to normal fluctuations , I return to speak on my video game repertoire .

Looking back, just as iTZKooPA has, I realized just how many MMOs I’ve tasted.

Interestingly enough, Mortal Kombat on the SNES was the first video game I ever played. I was around five (Ed. Note *gasp!*). I used to drive my older brother insane by pulling out these advanced combo attacks on him. I had the unfair advantage to learn throughout the day while he was at school (no pre-school FTW!). From there my gaming habits moved to Mario and Star Fox.

I slid my foot in the industry off and on with consoles years ago. From PS2, I bought a GameCube, then an X-Box. I was a conservative, yet well-versed gamer, switching from Ps2 to X-Box due to exclusives and needing cash for more titles – thank you GameStop. In the end, I only to ended up selling them all when I was first introduced to World of Warcraft. I haven’t looked back since. There’s an occasional game here and there that catches my eye, but usually there’s a PC version that I can buy; Assassin’s Creed being was the most recent franchise.

Who hasn’t played RuneScape? Seriously. We’ve all been there. Then we grew up to play with the big boys (and girls) on our home servers on WoW! 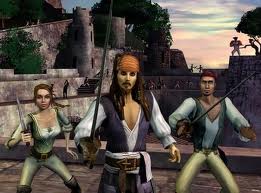 This was the first non-browser based MMO that I had tried. With simple mechanics and easy to learn systems, it was a decent pick-up and play MMOG. Kids, likely tweens, were the target audience. Looking back, I see it more as a younger version of what STO now is, with two combat systems: ship and ground. Sadly, it was lack-luster and couldn’t compete with anything else.

My great friend introduced me, trying to explain to me just how cool it was compared to the game I was absorbed in at the time, Pirates of the Caribbean Online. Finally, after months of convincing, I created a free trial and was sucked in to the black hole that has consumed 12 million fellow humans.

My first character was a hunter, and I took him from level 1 to 70 (cap at time) just months before Wrath of the Lich King launched. Around that time, I began creating alts for experimentation purposes. I created a warrior and druid during my confused time. When I left WoW for 3 months – grades had dropped at school – I decided playing a warrior was much more fun, and as a tank I would see more content. Currently, the account is frozen until Cataclysm; perhaps it’ll be unfrozen for a special event for LoreHound…

The LoreHound crew was approached with the gift of an account, in hopes to get some publicity for the game. Pixiestixy, playing as a quest giver, came to me wondering if I could handle it. ‘Course I could! No quest goes undone by a Lore Hound! Sadly, I still lack the funds to pay to play multiple subscription MMOs. Soon, soon MMO industry. Just need a job.

I don’t know what it is, but I just never got in to this game. The free trial was too restrictive or the game to repetitive for my tastes. This has probably all changed given all the patches, but my situation doesn’t allow me the opportunity to see the updates.

Testing this out at PAX, I knew I was hooked. I’m just waiting for it to go live. Go Nexon.

Leveling here is extremely easy. Mostly because anything you do in-game gives you experience. I’ve played for around two weeks, and I’m a level 22 (Commander 2) and the cap is 51 (Admiral).

The leveling system is highly engaging and pretty versatile. Stay tuned for my video covering the first mission of the recently released Devidian Episode Series.

I’m looking at perhaps a live feed of each episode mission as they’re released; what say you, Lore Hound audience?